At the south end of Goldsboro, is the historic keystone sign which lets people know they are arriving in Goldsboro. Like many other keystone signs, it not only gives the name of the town, but also a little bit of historical info. For Goldsboro it says:

The Keystone markers were a project that was started by the Pennsylvania Department of Highways, over 100 years ago. They were made of cast iron and have their trademark colors of blue and yellow. You can read more details on their history on the Keystone Marker Trust website.

A minimum of two signs were made for towns and boroughs, placed at the two main entrances of a town. Goldsboro has just the one, which means we had another one that has now been lost. The most logical place for the other one would be on Route 262, on the western border of town, where the Greg Gross sign is currently. (If anyone has any memory of the second keystone sign, please feel free to comment, or email me.)

When these signs were created, a lot of effort went into making sure they were accurate, so when it comes to our sign here in Goldsboro, I don’t think any of us had any reason not to believe what was printed on it.

When I began to research Major Goldsboro, this important guy who the borough is named after, I was surprised when I couldn’t find anything… until… I discovered that originally Goldsboro was spelled Goldsborough – then things started to open up.

Goldsborough was laid out in 1850 as a new town on a new railroad line that would connect York with Harrisburg. This railroad stop was going to be important because it was going to be the water stop for the train, a necessity for the steam engines.

As early as 1750, there was already a red grist mill situated where the new town of Goldsborough was to be established. Soon after the railroad went in, in 1850, Goldsborough began to attract some early businesses, including two saw mills, a hotel, and numerous small town necessities like a butcher, carpenter, general merchant, etc.

Getting back to where the name came from, if we go back a couple years before the town was named, we find some information about the railroad being constructed through what will be Goldsborough, and mention of the civil engineer, John McD. Goldsborough.

John McDowell Goldsborough, Esq. (1813 – 1895) was the son of US Senator Robert Henry Goldsborough and a member of the prominent Goldsborough family of Talbot County, Maryland.

After completing the York and Cumberland Railroad, John went on to be the chief engineer and general superintendent of the Manassas Gap Railroad, a line that ran into some financial troubles, and later the Civil War, and as a result was never completed to the full length as originally planned.

John was employed by the Manassas railroad company from 1850 through the Civil War in the early 1860s.

After the Civil War, and leaving the Manassas Gap Railroad, John became chief engineer of the Maryland and Delaware Railroad Company.

John was also active in the church. He was listed as being a representative at a number of church conventions for the Protestant Episcopal Church. Here is a mention of him being on a building committee for the construction of a new church building, continuing to put his skills to good use.

In a rather obscure story, John McD. Goldsborough was noted for presenting a pair of birds to President Grover Cleveland.

Searching in military records on Ancestry.com, FamilySearch.com and Fold3.com, I was finally able to find a record in 1862 of John in the Confederate Civilian’s Files. So during the Civil War, these papers actually show that he was a civilian agent, working at the Manassas Gap Railroad.

This document is like a receipt for which $750 was billed by John McD Goldsborough. You can see his signature in the bottom right corner.

Other than the many articles about the railroads he was the civil engineer for, mainly the Manassas Gap Railroad, there isn’t a whole lot to be found out about John. Even in geneaology or Goldsborough family history books, he seems mostly to just be a name with some dates.

John died on December 31, 1895. His obituary mentions his briefly a couple of his accomplishments, not mentioning any military service.

John died unmarried and was buried at his family cemetery in Talbot County, Maryland.

So, was John McDowell Goldsborough a Major?

Not that I could find.

Probably. He had Esq. (esquire) after his name, and he did afterall present a pair of peafowls to the President and First Lady.

So who was Major Goldsborough?

There are many websites and modern books that tell of the history of Goldsboro, NC, and they all pretty much say the same thing, like this taken from Goldsboro’s website:

“At the intersection of the railroad and the New Bern Road, a hotel was built and a community began to establish itself. This community became known as Goldsborough’s Junction.

The town of Goldsborough was incorporated in 1847, and the name officially changed to Goldsboro in 1869.”

I couldn’t establish how long Matthew had been an engineer before this, or how long he stayed in engineering. At some point he stopped and moved back to his home in Maryland and began farming. And actually he seemed to be more well known for his farming than he ever was as a civil engineer.

I was actually able to find Matthew mentioned in a number of books and publications like The American Farmer, where you can find him serving on agricultural society committees, or winning prizes for livestock or crops. 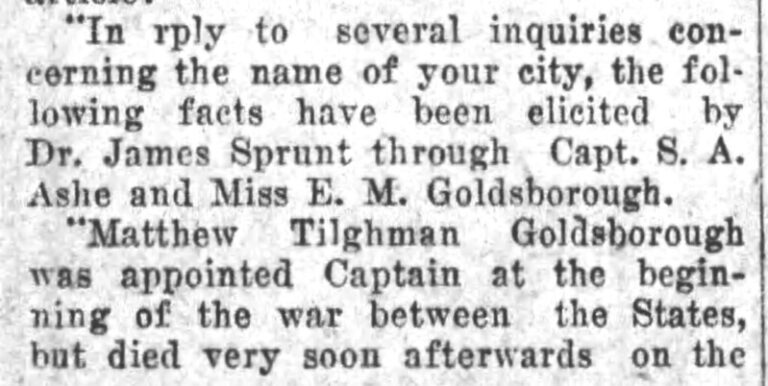 Interestingly, Matthew Goldsborough is also a member of the same prominent Goldsborough family from Maryland, and is a distant cousin of John Goldsborough.

But was Matthew a Major?

Honestly, I haven’t been able to confirm that. It looks like he became a Captain in the days leading up to the Civil War in 1860. But Matthew died in March of 1861, before the first official first battle of the Civil War, at Ft. Sumter in April 1861. So that didn’t give him a whole lot of time to climb up the ranks to become a Major.

In fact, I can only find mention of Matthew being a Captain in some of the earlier historical reflections on the City of Goldsboro. Like this portion of a newspaper article from 1920. This article goes on to give a longer history of Goldsboro, NC and Matthew Goldsborough.

The earliest reference to Matthew being a Major, so far that I could find, was in 1946 when Goldsboro, NC was going to be celebrating it’s 100th anniversary in the coming year. This article below is from 1947.

Other than mentions in a couple newspapers as being a Captain, I have not been able to find any military records showing that Matthew was a Captain, or a Major for that matter.

I honestly wonder if there was a mistake, and somehow Captain Matthew T. was mis-attributed as being a Major. And because both Goldsboro NC and PA were named after railroad civil engineers, that these two men got lumped in together as thought of as one man – Major Goldsboro.

Digging even further, the only Major Goldsborough that I have been able to find any kind of record of, was Major William W. Goldsborough.

Interestingly, because most of the members of the Goldsborough family were from Maryland, a border state during the Civil War, different Goldsborough men signed up for both the Union and Confederate armies.

This research journey has made me go in quite a few circles, but in the end, I can’t rule out with 100% certainty that John McD Goldsborough didn’t serve in the military as an officer, but I have not been able to find any kind of a reference.

Believe it or not, I wasn’t the first person to have questions about the Goldsboro sign. A writer for YorkPast wrote a series or articles on some of York County’s Keystone Markers, including ones about Cly and Goldsboro.

If you read the article, it’s interesting that the author sites the same reference to the George Prowell’s History of York County that says Goldsboro was named after J.M. Goldsborough. But not having found any other references to confirm this, the author questions that book’s accuracy, instead of the sign’s accuracy, and comes to the conclusion that the borough’s name is from the engineer of Goldsboro, North Carolina – Major Matthew T. Goldsborough.

I reached out to the Keystone Marker Trust, asking if they ever make replacement signs, or if there is an error that is found, if they can or would change it. Whether we want to replace the sign, or not, doesn’t need to be debated now, as they responded and said that they actually don’t have the patterns to create new signs at this time. They are working on finding a foundry that can, since all of the signs are 80 to 100 years old or more, and the original patterns no longer exist.

They also said that the Goldsboro sign wouldn’t be the first sign they’ve found with an error. The Mt. Wolf sign attributed the name of the town to Governor George Wolf, who was Governor of Pennsylvania from 1829 – 1835. The town decided to take their sign down because they discovered that it was actually named for George H. Wolf, who was the stationmaster of the railroad, and postmaster in what would become Mt Wolf.

Another sign in York County with an error is the one for Shrewsbury. It has a typo on it, misspelling Loganville as Logansville.

So for now, the Goldsboro sign will remain the same. I’m 95% sure John wasn’t a Major. One thing at least is for certain, the sign spells his name wrong.

But if we wanted it to reflect a more accurate history, it should say: