The (sort-of) Brief History of

Goldsborough is beautifully situated on the west bank of the Susquehanna River, at the mouth of Fishing Creek, nearly opposite Middletown, about 14 miles from York and 11 from Harrisburg. The York and Harrisburg Railroad passes directly through the town. It cannot fail to become a place of considerable importance. It has many elements of prosperity in its location - and many advantages that are and must remain peculiar to itself.
Dr. Alexander Small
1850

Before Europeans came, native tribes once fished, hunted and lived up and down the Susquehanna river. To this day, arrowheads and other evidence can still be found on the river islands and on the shores of the river.

The Dutch were the first Europeans to explore up the Chesapeake and into the Susquehanna, later followed by the French and English as they began to establish colonies, like Pennsylvania in 1681.

In the year 1738 Nathan Hussey, an intelligent Quaker from New Castle County, Delaware, obtained a grant for land on which the borough of Goldsboro now stands, and a short distance above he opened a ferry across the Susquehanna River.

In 1743 a road was opened from Walnut Bottom, now in Cumberland County, then in Lancaster County, through Fishing Creek Valley, to Hussey’s Ferry. A grist-mill was built at the mouth of the creek as early as 1750. The mill, for more than a third of a century, was owned by John Prunk, and was known as the “Red Mill.”

The fishing interests on the islands of the Susquehanna became profitable, and Col. James Burd, of French and Indian war fame, who lived at his mansion, called “Tinian”, located above Middletown, became the owner of the river lands. Nathan Hussey moved to York, where he became one of the founders of the Friend’s Meeting there in 1764.

Henry Etter was the proprietor of a tavern, known as “Etter’s Tavern.” As early as 1838, secured the establishment of a post office there at his tavern. In addition to being a post master, Mr. Etter was a Justice of the Peace for Newberry Township commencing October 17, 1822, and the proprietor of the Middletown Ferry, previously known as Nathan Hussey’s Ferry. Etter’s Tavern functioned as an inn, a stage coach stop, a mail drop, and from 1842 as a U.S. Post Office.

There was a continuous road from York to Harrisburg, along the Susquehanna, as early as 1800, but it was not a much travelled route until the turnpike was completed from York Haven to Harrisburg, when it then became a prominent stage route. The exchange stables were at Crull’s tavern, one mile below the site of the Borough, and an important stopping place for exchanging horses was at Henry Etter’s tavern, one mile north of the town.

Before 1848 there were two competing stage lines over the pike from Harrisburg to York. At one time passengers were conveyed from one place to the other for 50¢ each and a good dinner in the bargain.

Henry Etter died in the spring of 1848, and the post office was removed to Adam Kister’s Ferry, which was one-half mile north of Middletown Ferry. Adam Kister was a soldier of the Revolution, and complained bitterly of Gen. Lafayette for accepting as a gift a township of land in Louisiana. This was in 1825, on which occasion Lafayette visited York, Lafayette travelled next to York Haven and spent the night in the York Haven Hotel. He traveled on to Goldsboro and made a stop at Etter’s Tavern. About 17 years later Charles Dickens made the same trip and stopped at both the York Haven Hotel and Etter’s Tavern. In Goldsboro Dickens and his wife enjoyed a Pennsylvania Dutch sauerkraut supper. This was a new experience for the Dickenses, and from the reports thereafter circulated by Henry Etter, the supper was a huge success and praised highly by his visitors.

The site of present day Goldsboro, before 1850, consisted of three or four houses and the old “Red Mill.” Martin P. Burger conducted a store east of the stagecoach turnpike. This collection of houses, mill and store was humorously called “Martinsville.”

In 1849, Dr. Alexander Small, of York, secured the services of Daniel M. Ettinger to make a survey of a plot of ground on which the present town of Goldsboro now stands.

This was the first planned rail community in York County, and the last county town to be laid out on a Philadelphia grid plan with a center square.

P.A. & S. Small purchased the “Red Mill” that used to belong to John Prunk and continued its operation, in addition to the other saw mill that they owned which later became known as the Atlantic Saw Mill.

After the laying out of Goldsborough, Alexander Small began to sell building lots to anyone who was interested in making a start in the new town. He ran ads, like this one in the York Gazette from November 17, 1850:

As the York and Cumberland Railroad was being constructed, in 1849-50, over the lines of the turnpike, the stage line for a year or two left the turnpike route at Etter’s tavern, and extended up the valley to Harrisburg.

When the railway was completed, in 1850, the station was called by its present name in honor of John McDowell Goldsborough, the civil engineer of the road.

In 1864, Goldsboro was incorporated as a borough out of Newberry Township, one of the three boroughs to do so, Lewisberry and York Haven being the other two.

As the town grew with businesses over time the name was shortened to just Goldsboro. The railroad offices did an extensive business, it being the most important station between York and Harrisburg.

An article from the York Gazette and Business Directory describes Goldsboro:

“It is a flourshing village, situated on the Susquehanna River, 16 miles from York. On the Northern Central Railroad, its doing a large business in lumber and produce. There are two steam saw mills in the place! One manufacturing upwards of 3 millions of feet of sawed lumber, of various kinds, annually. It has two upright saws, one gang saw, one slitting saw, and a gang slitting saw for manufacturing sideing, and six circular saws, set in operation by an “80” horsepower steam engine, owned and conducted under the firm of Small & Stair & Co, The other saw mill, owned and carried on by Isaac Frazer, manufactures about one million feet of sawed lumber per annually.

There is also one brick Grist Mill in the place, 50 x 70 feet, five stories high, capable of manufacturing 100 barrels of flour in 23 hours. It’s owned by P. A. & S. Small. Also one large warehouse, for grain and produce. There are also two hardware, dry goods and grocery stores, one of which is owned by Frazer & Kister.”

Through the late 1800s and the early 1900s, Goldsboro was not only a thriving community with lots of local businesses like grocery stores and restaurants, but it also was a place of industry, including saw mills, grist mills, cigar factories. It had a school, 3 different church denominations, and in the 20th century it started a fire company and even had a national bank. The railroad offices did an extensive business, it being the most important station between York and Harrisburg.

Goldsboro was a tidy little river town that became known as a destination to visit. The riverfront and the islands were great places for fishing, and people would visit the many picnic grounds, band stands, and town activities that were frequent. Visitors would stay at Goldsboro’s 2 hotels, or rent small river front cottages and lodges when they would come to visit the recreation Goldsboro had to offer.

Like many small towns, the depression of the 1930s and World War II hit Goldsboro hard. After the war life continued on, but the factories and industry that once existed began to dwindle. Over time the small businesses began to leave and less community events happened.

put on the Map

Towering over Goldsboro, situated on an island in the Susquehanna River, is the Three Mile Island nuclear power plant. On March 28, 1979, reactor number 2 had a partial meltdown and subsequent radiation leak.

The accident and evacuation from the area brought national attention to Goldsboro, since it was the closest town to the incident. News networks and later tourists came to witness the most significant commercial nuclear incident in US history. Many residents and farmers had problems with their animals and crops immediately after the radiation leakage.

Since the post office had always been called Etters, the area was not well known as Goldsboro, but after the TMI accident, Goldsboro was literally put on the map.Unfortunately, a nuclear accident isn’t necessarily something you would like your town to be known for. 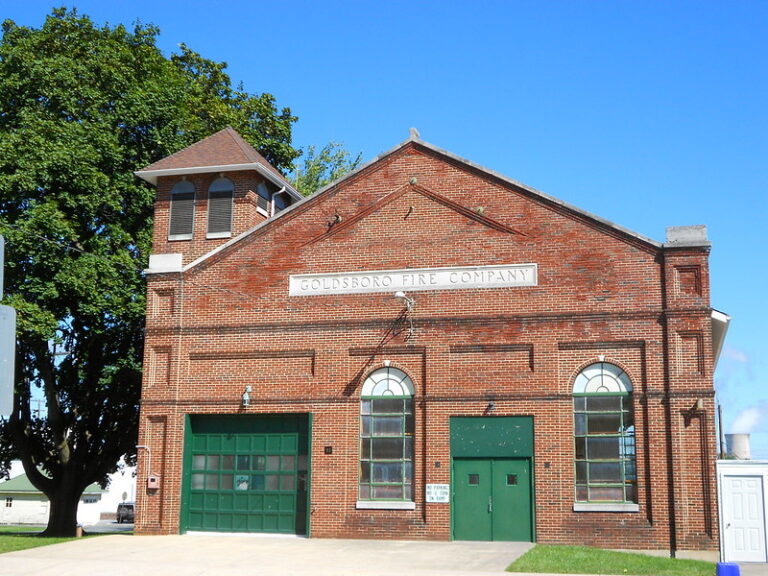 In 1984, Goldsboro was listed on the National Register of Historic Places.

Today, much of its former glory has now faded. But it remains a popular spot for fishing on the Susquehanna River, and many of its long-time residents like to reminisce about the good ol’ days.

In 1976, the Goldsboro Historical Association was formed. One of its first money making projects was an Arts and Crafts Show. Funds were being raised for the restoration of historical sites in the town.

On October 17, 1976 the square of Goldsboro was rededicated by the Historical Association in celebration of its restoration. Following the ceremony, a Bicentennial Fun Day took place. Old fashioned games for the children were held on the lawn of the Fire Hall. A chicken corn soup supper was served. In the evening a fashion show took place with clothes from the 1800’s to the present time. The different fashions were donated for the show by residents of the community.

Immediately following, was a program of short skits entitled “This is Your Life, Goldsboro!” The evening closed with a wiener roast and hayrides. It proved to be a very worthwhile Bicentennial Celebration. 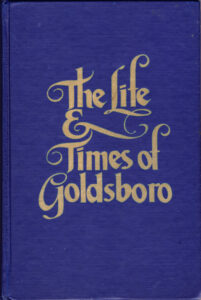 The association published a book “The Life and Times of Goldsboro” edited by Jessie Sanders and illustrated by Glenn Schlosser. It was compiled from information from various York County histories, newspapers, and local residents memories. 500 copies were made, and it has saved much of the town history that may have been lost if not for the efforts of those who contributed.

The original association became dormant, but in 2019 it was revived and is now in the process of gathering the history that has been lost, including many photos published in the Goldsboro book which we would like to find again.

Sources for this article: